The discussion paper , as it appears to the reader.[/caption]

The FCA and The Pensions Regulator (TPR) have published a joint discussion paper on developing a common framework for measuring value for money (VFM) in defined contribution (DC) pension schemes. The aim of the two regulators is to drive a long-term focus on VFM across the pensions sector.

So Discussion Paper 21/03 Driving Value for Money in Defined Contribution Pensions announces itself.

To say that this is a pensions paper is wrong. All kinds of retirement income from DB scheme pensions to annuities and to DC pots in drawdown are excluded from the study. To use the jargon, the scope is "pre-crystallization". This will come as a surprise to the IGCs and GAAs charged with publishing the VFM of investment pathways and came as a surprise to me. I applaud the aim of including workplace and non workplace, contract and occupational DC, I don't understand why VFM is any less important to the saver in decumulation.

But here I enter into murky waters,  "saver" is the generic term that might include "member", "policyholder" or "consumer", but the saver is not a spender. But the conditions that govern value for money as pension pots grow are the same as when they decline and to suppose that VFM is any less important post crystallization is a nonsense. The paper does not make it clear why pots in drawdown are out of scope and I hope I won't be the only one calling for spenders to be included in the long-term focus on VFM. 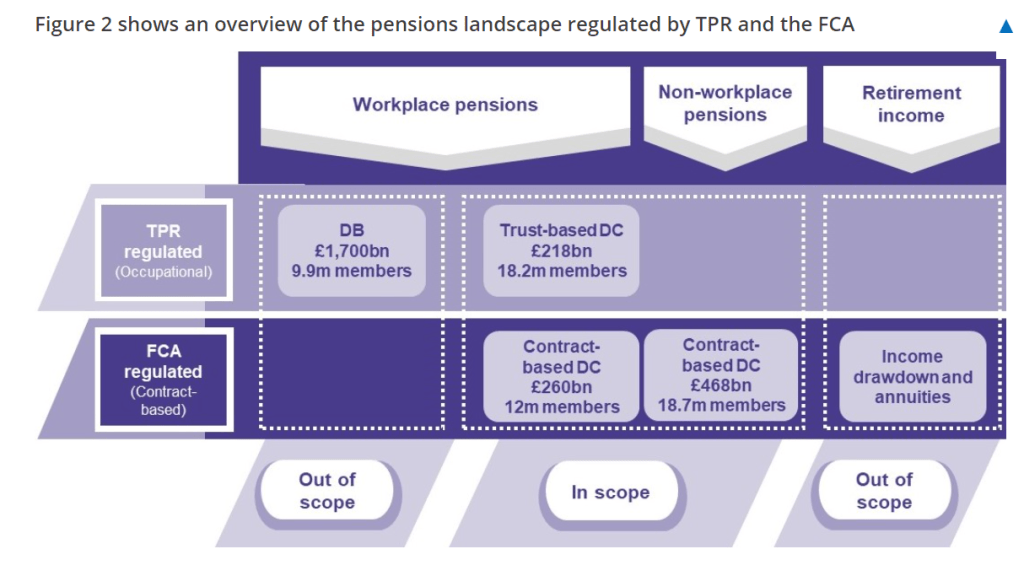 The aim of a pension plan or scheme is to provide a pension, not a pot. The Pension Regulator is charged with oversight of the payment of pensions, the FCA provide oversight of investment pathways. The focus of pension saving is to ensure adequate income for those in retirement, otherwise we might consider pensions a variant of the ISA family.

This paper is good in a number of ways.

I like the continued focus on VFM as about achieved investment performance, experienced service measured by the spend on each (the money). The term "a common definition" has been dropped in favor of a common framework and I guess that's because nothing punchy enough came out of consultation responses to CP20/09.

I like the emphasis on factual analysis of what has happened rather than conjecture of what might happen. Past performance is acknowledged as a guide to the future

The paper doesn't quite have the courage of that conviction, prefacing the statement with the usual warning that performance is no guide to the future but the cat really is out of the bag, TPR and FCA cannot have it both ways, you do not judge performance on promises.

But it is sensible to include the forward looking drivers of performance in the measurement of service delivery. The paper includes governance in service and includes in its analysis of good service the capability of those governing the plan to deliver on the challenge laid down by the Chancellor and Prime Minister to diversify into illiquids and ensure our pension pots are invested to meet ESG targets. This is the right way to include forward looking performance indicators in the common framework.

I like the emphasis on benchmarks, people can't make judgements on data unless they know what they should expect as normal. The concept of normal is of course open to argument but in terms of performance , costs and service, there is enough data available to work out what "average" looks like. There is a benchmark to everything though agreeing on it may need force majeure.

I like the recognition that the framework may need to be standardized and though it is only explicit on creating a standard for service (which it concludes is subjectively measured), I will be arguing that performance and costs could and should be measured in a standard way and that the common framework is worthy of standardization by BSI, a standard certified by UKAS. Our pensions should come with a Kitemark that tells us they are giving VFM and if a pension scheme loses its Kitemark, it can expect to lose its customers.

Where the paper falls short

This is an FCA/tPR joint production and it should be applauded for that. But there are cracks where the regulator's views don't quite join up and this shows.

The central crack that divides is whether this is a framework that has direct value for the "saver" or is for trustees, IGCs and GAAs to ensure the saver's interests are pursued. It veers between statements that imply the common framework is beyond the understanding of the saver, to a statement that the common framework

"will enable UK DC savers to be confident that they are maximising their retirement income for every pound they save".

Though this confident tone is not maintained a few lines later

The paper falls short of defining the scope of its analysis but worse , it is unclear about what a common framework for value for money can achieve.

What can be achieved?

The main thrust (and innovation) of this paper is its recognition that we need one way of disclosing the value we are getting for the money we are paying.

We propose that such disclosures need to be made on a consistent basis to allow for effective comparison. Getting the standards disclosures right is essential and requires complex considerations.

It is also important to consider in what format such data would be disclosed so that it can be used effectively. We think that once data is available market solutions for using and comparing this data will be able to emerge.

The paper acknowledges that right now , there is no consistency and that data is not being presented in an effective way. For instance on performance it concludes

It alludes to the net performance tables in the guidance to the DWP's value assessments for <£100m DC occupational schemes. However , these tables do not benchmark data and comparisons are left to trustees who need to seek out comparable data. This might work for a highly competent group of pension experts but falls far short of providing a common framework for all DC pensions and for all their stakeholders. For that we need standardization and the logical conclusion is that we need a VFM Kitemark

If we are to have a Kitemark , it is for this reason (taken from Wiki)

The Transparency Task Force set up a working group in 2018 to establish a Kitemark for Pensions VFM, we have had meetings with BSI and UKAS who are see a performance benchmark as a certifiable standard. I am quite sure that service and charge measurement can be included in a single standard for the framework and/or individual standards for each element.

The paper asks whether such a standard can be achieved from within the industry. It appears skeptical. I suspect that neither DWP or HMT have much confidence in the industry agreeing on anything so ambitious and it is likely that Government may have to sponsor the standard rather than leave it to any or all of the pension industry trade bodies.

That said, I believe there is a groundswell of sentiment within the pensions industry to see this as an opportunity and help get the framework right. 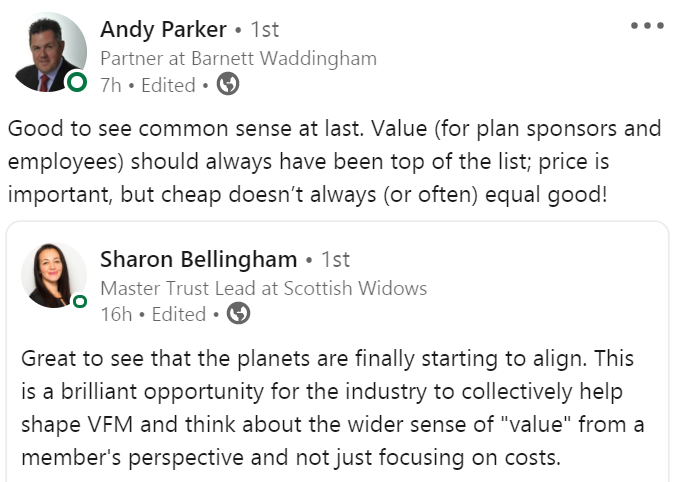 This leads to the key question, which is not amongst the many in the discussion paper, "who drives this common framework?". In my mind , there is no doubt, the driver for change in this matter has to be the Government and the instrument of its creation a "neutral convenor" (the BSI). It will not be easy for the convenor to create harmony between competing interest groups but with a sponsor within Government, the delivery of a common framework , a certified standard , accredited by UKAS , could happen within five years.

Thanks for reading this far- we are producing a free-to-attend web-conference on the afternoon of 22nd October where you will be able to speak to Cosmo Gibson of FCA, Louise Syvier of TPR, Andrew Blair of DWP and we hope representatives of standards and accreditation organizations. This will also be an opportunity to think about the practical application of the framework for IGCs , GAA, Trustees, employers and those of us looking for a framework to combine our pension pots before spending them.